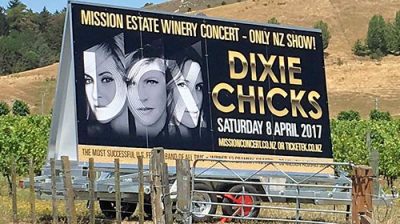 In the early hours of Wednesday morning thieves broke into the Mission Estate vineyard and stole the Titan car transporter trailer.

The trailer featured a billboard promoting the Dixie Chicks.

Not wanting to appear too obvious, the thieves later unbolted the billboard and made off with the trailer.

Mission Estate asks people to keep an eye out for the transporter trailer and if you see it please contact the Mission Estate at: info@missionestate.co.nz

With over 30 million albums sold and winners of 13 Grammy Awards, the Dixie Chicks are the most successful US female band of all time.

The first time ever in New Zealand, the Dixie Chicks perform at the Mission Estate on Saturday 8 April.

Proceeds from the Mission Concert go towards supporting the religious and charitable works of the Society of Mary in New Zealand. Hawkes Bay has been listed by Wine Enthusiast among ten of the top wine destinations in the world and Mission Estate named among the top places to taste.

Listed as the number three wine destination in the world, ‘The Bay’ is the only New Zealand wine region mentioned by the publication.

The region is also praised for the range and variety of restaurants and scenic spots.

“This bucolic region excels at classic Bordeaux varieties, while syrah is angling to become the areas’s flagship wine. Beyond the bottle, however, the landscape, food and people are, as the country’s marketing slogan campaign says, 100 per cent pure New Zealand,” wrote Lauren Mowery.

Wine Enthusiast is a New York publication describing itself as “a prominent multichannel marketer of a growing line of products that satisfy, inform, enrich, entertain and inspire”.

A 30 year old business, Wine Enthusiast company claims to be the number one source for information, education, events and travel.

Mission Estate is New Zealand’s oldest established winery. Established by the French Marist Fathers and Brothers in 1851 it grew grapes for sacramental purposes, but also for table wine.

Today, surpluses from the sale of Mission Wine are spent in New Zealand and contribute to the charitable works and purpose of the Society of Mary in New Zealand.

For the first time since 1993 the Mission Concert will not be staged at the end of summer.

Worries began in February this year when a Ronan Keating headlined concert attracted less than half of a normal crowd.

“The decision did not signal the end of the event”, he said.

James Erskine, Chairman of Sports and Entertainment Ltd (SEL), said in a statement that the concert had been postponed until a suitable act could be found.

“The search for a suitable act had been fruitless so far this year and rather than continue to ask for patience from the many thousands of loyal concert fans who attend annually, SEL had made a decision to postpone.”

The event organisers were disappointed for businesses and fundraising organisations who had come to rely on the Mission for their share of the multi-million dollar Hawkes Bay event.

In recent years, the Mission Concert has faced increasing commercial competition from other concerts and sports events, highlighted when on the same day as last February’s concert there was a sell-out for Kiwi performers Sol3 Mio and Dame Malvina Major at Black Barn Winery, Havelock North.

In recent years tougher alcohol licensing conditions stopped concert patrons from bringing their own refreshments into the concert.

Mission Vineyards were established in 1851 by the Society of Mary whose charitable works in New Zealand directly benefitted from the concert.

Michael Gaffaney, chairman of the Society of Mary New Zealand finance committee stepped down on Wednesday 27 February after many years of service to the Society. END_OF_DOCUMENT_TOKEN_TO_BE_REPLACED