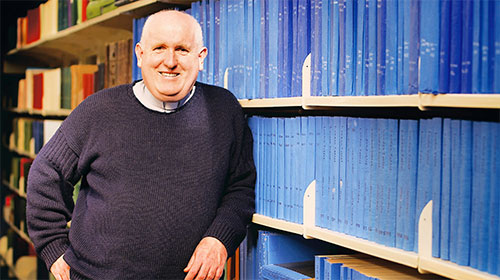 The appointment, made by Good Shepherd College’s Trust Board is for a brief period while a review of the structure of the College is undertaken.

The appointment also coincides with Fr Duffy concluding three terms as a provincial councillor of the Society of Mary in New Zealand.

From Christchurch, Merv Duffy joined the Society of Mary and was ordained in 1985.

While studying for priesthood he also completed a degree in Mathematics at Victoria University of Wellington.

After ordination he taught Mathematics, Computing and Religious Education at secondary level, and was one of the group of teachers involved in the writing of textbooks for the ‘Understanding Faith’ religious education syllabus.

The College exists to provide theological education in the Roman Catholic tradition and has a special focus on the formation of candidates for ordained priesthood in the Catholic Church.

As leaders of the Marist Fathers from around the world gathered in Rome at their annual meeting, they took time out to participate in the blessing of the new Marist Fathers International Theologiate  ‘Casa Di Maria’, “Mary’s House”, at Via Livorno, Rome. END_OF_DOCUMENT_TOKEN_TO_BE_REPLACED

Due to unforeseen circumstances and at the direction of the Superior General, the Marist International English language Novitiate has been transferred from Fiji to New Zealand.

The transfer came about because into the first weeks of novitiate a number of significant problems, particularly in the area of health, arose for the non-Pacifican novices.

The Master of Novices, Fr Pat Breeze in conjunction with the novitiate staff, Superior General and General Council, judged these matters sufficiently serious that should the novitiate remain in Tutu it would be very difficult to attain the aims of the novitiate positively and effectively.

In consultation with the major superiors who had novices in the novitiate, the Superior General asked the New Zealand province was asked if it could provide, if necessary, a place for the English-speaking novices at short notice.

The provincial and council considered several options and in the end decided that the most realistic choice was the refurbished Maryknoll.

The decision to use Maryknoll was a difficult one, particularly because a new community was looking forward to occupying the refurbished premises.

While another option might have been available, the property is not owned by the Society, was somewhat “unknown” to the Society, and negotiating to rent the it would delay the progress of the novitiate.

Maryknoll has previously been used for novitiates and second-novitiates.

The novitiate at Tutu is continuing for the five Oceanian students. Fr Boniface Kevon is their Novice Master and Fr Fritz Arnold is assisting him.

There was discussion about moving all the novices to New Zealand but was not possible as a number have health issues which would preclude their getting the necessary visas.

Recently during a visit to Maryknoll a video was compiled on a mobile phone. It’s a bit jerky and at times there are issues with lighting. (Apologies.)

The sound is deliberately suppressed. To make up for the lack of commentary, the video

With the exception of the new chapel, the refurbished Maryknoll has a familiar look to it.

Once again apologies for all the things we are accustomed to with professional video, but hope that none the less, this gives you a sense of the place.

The International Marist Novitiate starts in Tutu, Fiji in February and until then, the novices have begun a month’s inculturation/orientation program. The program is being conducted with the help of Columbian Fr Frank Hoare, and of several Fijian Marists.

The refurbishment of the new Society of Mary international theologate buildings at San Giovanni Evangelista continues and the third floor residence for the Italian community will be ready for occupation at the end of October. END_OF_DOCUMENT_TOKEN_TO_BE_REPLACED

The former Society of Mary owned building Via Cernia, in Rome, is now open as a centre for pilgrims. END_OF_DOCUMENT_TOKEN_TO_BE_REPLACED