Ten years in the making, “Broken Vows” is a novel inspired by a relationship which began at Mt St Mary’s Seminary, Hawkes Bay.

Author, Rohan West, aged 49, released his debut novel “Broken Vows“, loosely based on fact and inspired by his maternal grandparents meeting at the Seminary after the 1931 Hawke’s Bay earthquake. 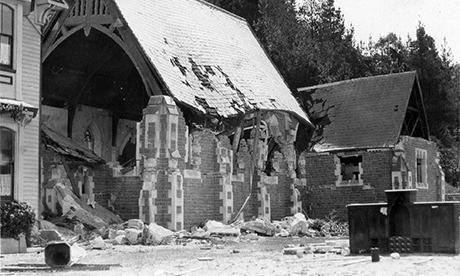 The plot has West’s grandfather, Albert Robertson a seminarian, caught in the Napier earthquake of February 1931. Buried in the rubble of the seminary’s chapel, he is pulled out unconscious and barely alive.

West’s grandmother, Abigail McCarthy, a nurse from the local Napier hospital, was sent to the Mt St Mary’s seminary to tend to the injured, along with her cousin Moira.

And there the romance started.

West, an expat New Zealander and sports marketer lives in Leicestershire, UK. He is delighted his book has been released after nearly 10 years in the making.

“This has been a labour of love for me but it’s an inspiring story which I wanted to share,” he said.

“The story of how my grandparents met, fell in love and eventually ran away together was a family secret for over 50 years.

“My mum and aunt only found out by accident,” he said.

West told the NZ Herald that his grandfather loved literature, so he wanted to honour their beautiful story by writing about it.

The Amazon review says of the book, “Broken Vows is a historical romance that will delight fans of Sebastian Faulks and Colleen McCullough.”

Marist seminarians from the 1970’s onwards are being invited to a reunion with a purpose; to see where their mission is taking them now.

“Our years at Mount St Mary’s were some of the most memorable of our lives. Let’s re-live the memories, re-invogorate the friendship and share where our Mission is taking us now”, say the organising committee in their invitation.

The provincial of the Society of Mary, Fr David Kennerley will welcome participants and bless the occasion.

Other key moments of the weekend are a discussion of a “Marist Alumni proposal” and the laying a plaque for old boys who have died.

The weekend also has its lighter moments with a tour of the new cellars, a “high tea” in the Mission Estate’s award winning former chapel restaurant, singing the top ten hits from the hymnal and the opportunity to chat over a few wines late into the night.

The reunion at the once Greenmeadows seminary, now historic Mission Estate Winery, follows several successful catch-ups around the country to mark the launch of the book On a Mission, edited by Shaun Davison.

Places are limited to 180, including partners.

The response to the Marist vocations discernment weekends continues to show promise.

So far, 16 young men have attended one of the weekends held at the Marist Seminary in Auckland; seven attending the latest event.

Organiser of the weekends, and associate vocations promoter, Fr Peter McAfee, is very pleased with the response.

“The support was palpable”, he wrote thanking the Marist communities for their prayers and support of the initiative.

Fr McAfee says that every one of the 16 came because of the suggestion and invitation of a respected adult. He noted that while most participants were invited by Marist priests, two of the last group were encouraged to attend by lay women.

Fr McAfee is encouraging Marists, and lay men and woman to continue taking the risk to invite people to consider religious and priestly life.

“Even if a person says no, nothing is lost. It is still a great vote of your confidence in him. He won’t be offended by that,” he says. The construction of new Marist seminary in Rome is nearly complete.

The seminary, on the corner of Via Della Marsica and Via Livorno is on the 4th floor of the Marist school in Rome. It occupies the former community area, the Marist Community moving down one floor. END_OF_DOCUMENT_TOKEN_TO_BE_REPLACED