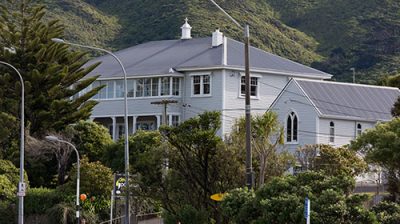 The Society of Mary’s purchase of a property in Johnsonville is to be used as a base and outreach centre for Challenge 2000.

The joint announcement was made by Fr David Kennerley sm, Provincial of the Society of Mary, and Steve O’Connor, Challenge 2000 Director.

Fr Kennerley sees the initiative  as part of the Society’s ongoing commitment to working with youth and its support of Challenge 2000.

The new centre gives Challenger 2000 a unified base to offer a wider range of services and a chance to develop other ministries, including an alternative education college, youth development and youth ministry programmes.

Calling it “a dream come true”, Director of Challenge 2000, Steve O’Connor says the organisation is “absolutely delighted” with the purchase.

“It’s something we have been hoping and praying for,” Mr O’Connor said.

“It will enable us to work more effectively and better serve our young people and families.”

Mr O’Connor called it an excellent example of a collaborative gospel partnership in action.

“We look forward to the official opening and shift mid-year and thank the Society of Mary for this huge commitment,” Mr O’Connor said in a statement.

The initiative is also welcomed by Archbishop of Wellington, Cardinal John Dew.

“This will enable Challenge 2000 serve even more young people and their families,” Cardinal Dew said.

The building was formerly a Brigidine convent in Johnsonville, Wellington.

Sr Anne Phibbs along with other Brigidine Sisters who previously lived at the convent said they are delighted their old home will be used by Challenge 2000.

‘After the Sisters left, two more owners made vast improvements to the building and it is very pleasing the ‘old Convent’ should come back to life within the Church and in such good condition.’

Marists from around New Zealand gathered on Saturday to mark the bicentenary of signing the pledge at Fourviere.

The format throughout followed a similar pattern; prayer, reflection and a meal.

A highlight of the Auckland celebrations was the celebration of mass presided by Marist Fathers’ provincial Fr David Kennerley, who also preached.

A keynote address by Dr Justin Taylor SM had been given in the morning and workshops on a range of topics occupied the ‘post-festive lunch’ afternoon.

It was a full house at the Pa Maria spirituality centre, Wellington where the theme was “Fourviere in the Year of Mercy”.

Those coming to the Wellington event were asked to bring a gift of school material for refugee children and such was the generosity that a huge collection of about eight heavy banana boxes were delivered to the archdiocese’s “Mountain of Mercy” effort.

The Wellington gathering also had the pleasure of listening to presentations from representatives of all branches of the Society.

Around 80 gathered at St Mary’s Taradale for mass, meal and a visual presentation. Damian Caccioppoli presided at the mass and John Mori preached the homily. According to a Christchurch report, “in the near Antipodes of Fourviere”, the eldest Third Order member in New Zealand, Mrs Ngaire Mahoney, mother of Michael Mahoney SM, held the taper lighting the mass candle.

Hymns for the mass reflected the Marist origins and today. They were in Latin, French, Māori and English.

The rugby balls were gifted to a Wallisian sister for the Futuna Island; where Peter Chanel shed his blood for the Marist project, and the students of Catholic Cathedral College who were well represented at the celebrations.

While some from the North traveled to Auckland, around 20 Marists from Whangarei and Okaihau gathered on Sunday evening for prayer, a meal and some social time.

For nearly fifty years David Gledhill a Pakeha Marist priest with Irish ancestry has worked in and around Māori.

Fr Gledhill told RNZ’s Jerome Cvitanovich that over the years the Society’s involvement with Māori has changed from the “Māori Missions”; a mission to convert Māori, to impose a faith and structure, to recognising that when Christ came on earth, he took on all humanity and brought all people to himself.

“We are all contributing to the one mission of Christ”, he said.

“Slowly we start to see the heavenly Father has no favourites and been with the people from the beginning, and in their way they are proclaiming the Good News.”

Fr Gledhill says the Church was wrong to impose its structure on Māori culture, rather it is important to be with the people and see the plan of the Father.

“The Māori do it different…they take it on as Māori.”

“I see the Māori coming as a family to Christ, their way, and I say hell, I’m Irish, there are some good things there and I’d like to have a part of that.”

In the late 1950s David Gledhill joined students from around New Zealand to begin training at the Society of Mary’s seminary in Hawkes Bay – Mount St Mary’s.

His original plan was to volunteer for missionary work overseas. But in his last years of seminary training he was asked to consider staying in New Zealand.

In 1966, shortly after his ordination, his superior sent him a short note advising him of his posting.

“Dear David,” it read. “You are appointed to Hato Paora college. You may do university if you wish. Kind Regards.“

After nearly 50 years of ministry with Māori Fr Gledhill says that once you see the realisation that the Father has no favourites and take part of the ordinary social structures of the Māori you have a great respect for and hope for the future.

Listen to the full RNS conversation with Jerome Cvitanovich

Marist seminarians from the 1970’s onwards are being invited to a reunion with a purpose; to see where their mission is taking them now.

“Our years at Mount St Mary’s were some of the most memorable of our lives. Let’s re-live the memories, re-invogorate the friendship and share where our Mission is taking us now”, say the organising committee in their invitation.

The provincial of the Society of Mary, Fr David Kennerley will welcome participants and bless the occasion.

Other key moments of the weekend are a discussion of a “Marist Alumni proposal” and the laying a plaque for old boys who have died.

The weekend also has its lighter moments with a tour of the new cellars, a “high tea” in the Mission Estate’s award winning former chapel restaurant, singing the top ten hits from the hymnal and the opportunity to chat over a few wines late into the night.

The reunion at the once Greenmeadows seminary, now historic Mission Estate Winery, follows several successful catch-ups around the country to mark the launch of the book On a Mission, edited by Shaun Davison.

Places are limited to 180, including partners. Philip Bennenbroek made his perpetual profession as a Marist in Whangarei on Saturday 22 March.

Phil’s parents and 15 Marists joined the parishoners of St Francis Xavier parish for the occasion, which was part of the Sunday vigil Mass.

Describing the occasion as ‘fantastic’, Phil said “all the different parts of the liturgy worked together really well to create a celebration that was greater than the sum of the parts.”

His abiding memory of the profession was of the warmth and friendliness of the community at Whangarei; a number of who took the opportunity to introduce themselves. END_OF_DOCUMENT_TOKEN_TO_BE_REPLACED