Brazil has a new nature reserve; a tribute to a popular Dutch Marist Fr Piet van der Aart who also worked for periods in New Zealand and Brazil.

The Brazilain reserve, which he helped establish, was formally named on 31 January 2018 and is called Reserva Volta Velha – Pe. Piet van der Aart.

A biologist, Fr van der Aart led many exploratory tours, for mainly groups of US students, to the nature reserve on the Atlantic Coastal rain-forest of Brazil.

The Reserve comprises 2,850,000 square metres of the Atlantic Coastal Rain-forest, in the North of the state of Santa Catarina.

The main goal of the reserve is to conserve biological diversity.

In an article published in the main papers of Brazil, a friend of Fr van der Aart, Lucio Amado Machado remembers the day when they got lost in the massive space.

“It took us more than four hours to find the trail.

“Piet was surprisingly calm as he was having fun watching 5 grown-ups worried about their situation, in near panic.

“We all laughed a lot after we arrived in the open area again.”

Fr van der Aart’s connection to New Zealand was as a teacher of biology at St Patrick’s College, Wellington.

After his time at St Pat’s, Fr van der Aart returned to The Netherlands and became parish priest in Enschede until he was sent to Sao Paulo in Brazil, working as a pastor in a favela and as a guest lecturer at the local university.

It was during this time he introduced American students into the tropical rainforests.

After ordination as a priest he requested to study music, however the Society of Mary superiors directed him to biology.

In Brazil, with his health deteriorating, he returned again to The Netherlands, dedicating the remainder of his life to composing songs in honour of God.

On good days he sometimes wrote two to three works.

It is said he was a musical perfectionist; that while breaking with traditional text, his compositions are very structured, strictly adhering to the rules of music and composition. 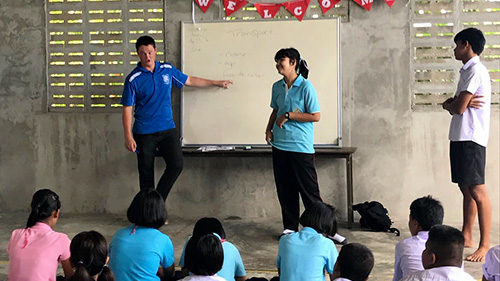 Most of the Burmese students are from the Marist school in Ranong, Southern Thailand, however others from neighbouring learning centers have also joined them for the “English camp”.

The mission experience is happening during the St Patrick’s students’ summer holidays.

As well as teaching English, the St Patrick’s students are experiencing first hand what so many confront daily; just to survive.

The idea to take St Patrick’s College students to Ranong is the brainchild of St Patrick’s teacher, Mr Maurice Atkinson.

Mr Atkinson and his wife Natalie spent 18 months in Ranong as volunteer teachers, and the experience of helping those in difficult circumstances made a lasting impression on both.

Traveling with the group, Fr Matthew Crawford SM says the St Patrick’s students are experiencing entirely different circumstances to their own.

“The experience seems invaluable, perhaps even life-changing”, he said.

Matthew Crawford says the St Patrick’s students have been struck by the dedication and determination the Burmese teenagers bring to their studies.

“Some young people in New Zealand are almost proud of how little work they can do in school, while for these students, few things are taken more seriously”, commented Dominic Bell, a St Patrick’s student.

“Receiving an education and in particular knowing English will be very freeing for these Burmese students”, says Hugo Bell.

Johnny English adds, “It opens up other work opportunities beyond the local fish and charcoal factories”.

“The Marist priests, Frs Frank Bird, Keven Medilo and Gil Casio along with two Burmese nuns and volunteers show God’s love through their commitment to those who are vulnerable and who the world sees as unimportant”, he says.

St Patrick’s College in Kilbirnie, Wellington, was evacuated on Wednesday morning after a bomb threat was made via email.

Rector Neal Swindells said the threat was made about 9.30am.

After contacting the police Swindells made the decision to send staff and students home.

Police remained at the school for much of Wednesday, working with the school’s management team, and investigating the threat.

As far as Swindells knew, the school had not received such a threat in the recent past.

He was not sure if any other schools in Wellington had been threatened in the same way on Wednesday.

It was obviously unsettling for staff and students, but the school had to make the decision to disrupt everyone’s day to make sure they were safe.

The threat follows similar incidents in February which closed a number of schools around the country.

At the time, police said the “robotic sounding” phone calls could be linked to an international hoax which had hit the US and other countries.

College principal Kevin Carter said his school was happy to help out. “They were very close to St Pat’s, and they wanted to evacuate the area.”

Carter said the intermediate students watched a movie in the hall for about an hour and a half, then headed back to their own school shortly before 2pm.

The announcement was made today in a media release, by Board Chair, Mr Chris McCarthy. END_OF_DOCUMENT_TOKEN_TO_BE_REPLACED