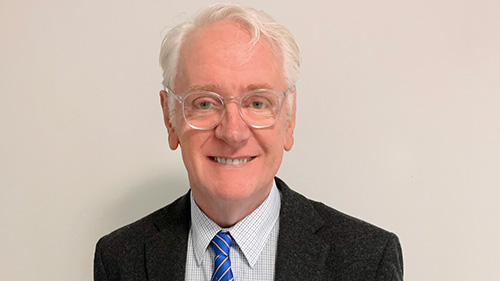 Marist fathers and brothers in New Zealand have elected David Kennerley as their new provincial.

Born in 1955 in Clive, Hawkes Bay, David enjoyed family life with his parents, Harry and Val, and his brothers, Philip and Peter.

Educated at St Joseph’s Primary School, Hastings and Napier Boys High School, in 1975 he joined the Marist seminary at Greenmeadows. He was professed a Marist in 1978. and ordained a priest in Hastings by Bishop John Rodgers in 1982.

For a number of years David was on the staff at St Patrick’s College Silverstream, during which time he qualified with a M.Ed in Guidance and Counselling.

At an early stage he was selected to be the Marist Fathers and Brothers Novice master, which saw him form young men as Marists in Hawkes Bay and Fiji.

Then in 1999, and based in Boston Massachusetts he became the first Society of Mary international English language novice master.

After another period as the international English language novitiate master, but this time based in Sydney, in 2006 David returned to New Zealand to live and minister at St Mary of the Angels parish, Wellington.

In 2009 he  joined the Marist spirituality ministry based at Pa Maria, Wellington, where he is engaged in retreat work and reflection days for individuals and groups. He is also part of the Cenacle Retreat in Daily Life Team.

As well as his current ministry at Pa Maria, David is also engaged in ministry with Rachael’s Vineyard.

David has a wide education. As well as his M.Ed in Guidance and Counselling, as a seminarian he obtained both a B.A. from Victoria University, Wellington, and a Bachelor of Sacred Theology from the Angelicum, University, Rome.

It has been decided to halt the online publication of the New Zealand provincial newsletter.

The decision was communicated to the subscribers yesterday in an email. Those interested in keeping in touch to sign up for our other newsletter Marist News.

The New Zealand Provincial Newsletter was first published online in 2002, and in the current format since February 2009.

The Marist Superior General, Fr John Hannan, has written to Brian Cummings confirming his re-election as Provincial for a second term. Brian was returned on the first ballot. END_OF_DOCUMENT_TOKEN_TO_BE_REPLACED Votes for the election of the New Zealand Marist Provincial have been disrupted by Iceland’s Eyjafjallajökull Volcano eruption and will now be counted in New Zealand.

New Marist legislation requires the votes for electing a provincial be counted in Rome, however with the likely backlog of mail, permission was sought from the Superior General to count the votes in New Zealand.

After consulting his council, the Superior General has granted the request.

He mihi atu ki a koutou katoa: Archbishop John Dew, our leader in Faith and Community, Justice Denis Clifford (Chair BOP and other members of the BOP), Members of the new Board for the Foundation, the Honorable Christopher Finlayson (and other parliamentary representatives), Fr Paul Martin (present Rector) and past Rectors, Principals of local Catholic schools  (and other College, school representatives), Old Boys of the College, Staff of St Patricks and Friends of the College.  Katahi te painga o tenei ropu… what a wonderful gathering to launch this new Foundation – thank you for being here.  It is a sign of good things to come. END_OF_DOCUMENT_TOKEN_TO_BE_REPLACED