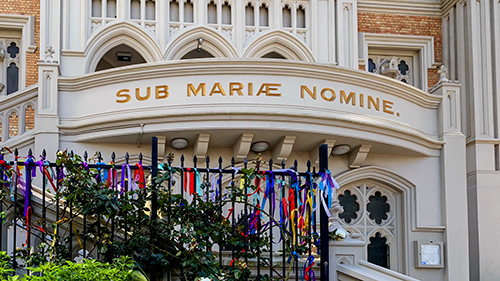 The parish priest at inner-city St Mary of the Angels changed tack on Sunday 4 November, joining his congregation in supporting sex abuse survivors, and tied a ribbon to the church fence.

Initially, Fr Conroy was uncertain about what the ribbons meant, so he cut them down. 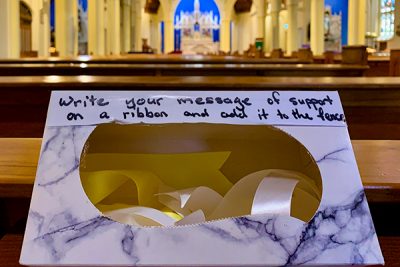 “People dump pamphlets without permission, people put rubbish in our gardens, glass, vomit, whatever. And so we’re forever trying to keep the place looking like it should”, he told Dr Murray Heasley in a covertly recorded conversation.

Heasley is a spokesman for the Network of Survivors in Faith-based Institutions.

Mrs Freer told Stuff that the initial removal of the ribbons “does not mean the church is in any way lacking in empathy for the victims of abuse.”

She said Fr Conroy had a think about it and was now happy to see the ribbons reinstated.

Mrs Freer said Fr Conroy explained at Mass the significance of the ribbons to parishioners, included a prayer for survivors of sexual abuse, invited parishioners to add to the collection of ribbons and added his own.

The St Mary of the Angels ribbon protest was part of the ‘Loud Fence’ movement which began last year in Australia as a response to the Australian Royal Commission.

In Wellington, the ribbons were placed on the church fence to acknowledge historic sexual abuse of children in the Wellington Diocese, particularly at St Patrick’s Colleges in Silverstream and Wellington City, and at St Bernard’s College in Lower Hutt.